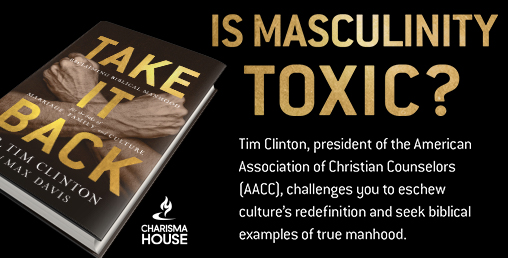 Endorsers Say ‘Take It Back,’ Debuting This Spring, Is a ‘Must-Read’ ‘Manifesto for Men,’ a ‘Strong Word of Encouragement’ and ‘Incredible’

LYNCHBURG, VA.—Has masculinity been redefined as something it was never meant to be?

Yes, say authors Dr. Tim Clinton and Max Davis in their forthcoming book, “Take It Back: Reclaiming Biblical Manhood for the Sake of Marriage, Family, and Culture.” In fact, the culture is determined to do just that.

But Clinton saysthat men do matter. They can be difference-makers in their circles of influence and have a positive impact on the culture and their families.

“In a culture that wants to keep men down, men need to know who they are, that God created them fully-masculine and that their ultimate source of strength comes from Him,” Clinton writes in “Take It Back.” “It’s a cry that echoes deep in the soul and from all ends of our society, and particularly from the women who love their fathers, husbands, brothers and sons. Most women want their men to be honored and to stand up and be men. Men have faltered and lost influence and territory. The good news is that for many who struggle, there is often a daily yearning to make it right. The reality is, masculinity is not and never was ‘toxic.’ Right now, more than ever, God is calling men to be men.”

Several experts, cultural leaders and influencers are already providing positive feedback about “Take It Back,” set for release by Charisma House this spring.