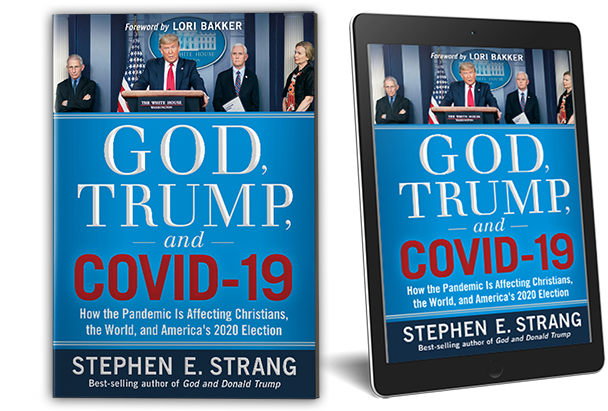 ORLANDO, Fla. — Occupying the Oval Office may be President Donald Trump’s maiden voyage into politics from his previous career in business and showbusiness, but Trump’s handling of the COVID-19 crisis suggests he has much in common with one of Western civilization’s most crucial statesmen — Winston Churchill — according to award-winning journalist and author Stephen E. Strang.

Strang, founder of Charisma Media and author of the newly released “God, Trump, and COVID-19,”says Trump is showing courage and persistence as he leads during an unpredictable and tumultuous season. In his article published in the Charisma Magazine titled, “Why Trump’s Many Detractors Only Reveal His Leadership Strengths,”Strang shares the connection he sees between Trump and Churchill.

“In the face of Hitler’s military might, Churchill had to resolve to move ahead anyhow and to never quit,” Strang writes. “History has shown that Winston Churchill was the right man at the right time to be used by God, yet he was also unpopular.

“Trump resembles the indefatigable British prime minister, who often went against convention, decorum and his own party to badger the people of Great Britain into defending their country against Hitler’s Third Reich,” Strang continues.

Churchill was flawed, and Trump has weaknesses as well, but Strang reminds his readers that God still placed them in authority to lead their countries during trying moments in history. Strang’s new book, “God, Trump, and COVID-19,” describes how Trump has led the United States during this difficult season due to the coronavirus crisis. In his podcast, “The Strang Report,” Strang discusses the constant flow of disapproval the president has faced while leading the country through this global health crisis.

“Here we are in the middle of the COVID-19 pandemic crisis, and it’s ironic to me and hypocritical that so many on the left have been so desperate to criticize Donald Trump in his quest to make America great again,” Strang said. “For example, in his handling of the COVID-19 crisis, the criticisms are wide and varied. Trump didn’t close the borders soon enough — he closed them too soon — he didn’t speak up enough — he spoke up too much — he took the advice of the wrong people — he didn’t listen to enough people.”

While Hitler’s conquest to take over Great Britain certainly differed from the social, economic, and political divisiveness America is experiencing, both Churchill and Trump have withstood opposition to their administrations while working to provide the best lives for their citizens. Trump has weathered much criticism but continues to lead the nation anyway, Strang says.

“Like Churchill, Trump is the target of opposition forces seeking to silence him for his bluntness and to stop him from speaking from the heart about problems the political establishment has been sweeping under the carpet for generations.”

“God, Trump, and COVID-19”is a timely follow-up to Strang’s “God, Trump and the 2020 Election,” revealing insider information about China, the virus, and the ever-increasing stakes of the upcoming election.  It will answer the question for Christian believers (and seekers) asking, “Where is God in all this?

“God, Trump, and COVID-19” is published by FrontLine, an imprint of Charisma House, which publishes books that challenge, encourage, teach and equip Christians.

The book is available in hardcover, paperback and e-book formats at www.godtrump2020.com.

Stephen E. Strang is an award-winning journalist who founded Charisma magazine, the only national evangelical magazine to endorse President Trump. He is also best-selling author of “God and Donald Trump.” Voted by Time magazine as one of the 25 most influential Evangelicals in America, Strang has interviewed four U.S. presidents and has been featured on many media outlets, including Fox News, CNN, MSNBC, and CBN.