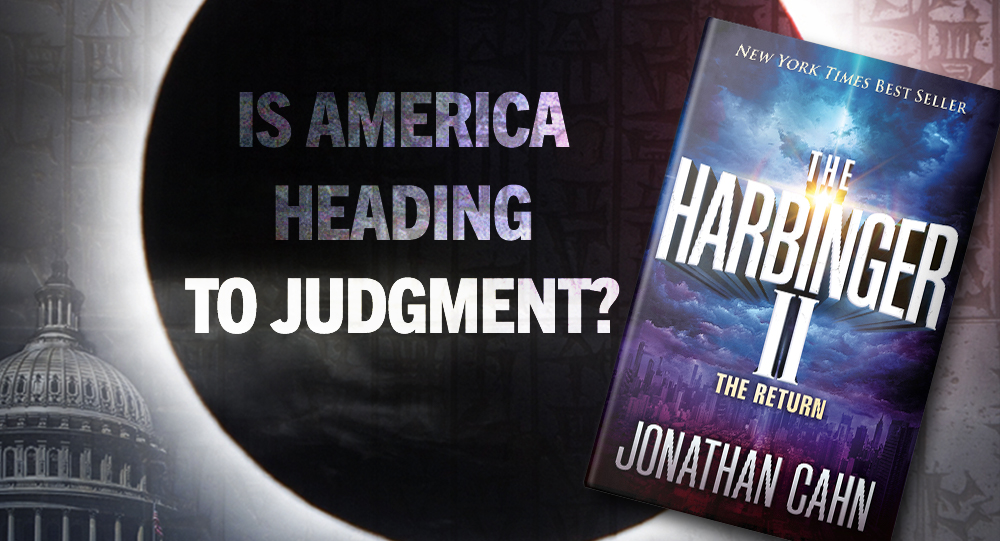 NEW YORK — Jonathan Cahn is well known all over the globe as the author of this year’s runaway bestseller, “The Harbinger II: The Return,” one of the most dramatic successes in book publishing history. He’s known for many other successes as well, including “The Harbinger,” which first launched him to worldwide prominence. Cahn is now making a dramatic plea to all Americans to pray as never before for our nation during a tumultuous year—a year of “shakings.” In his book, “The Harbinger II: The Return,” Cahn provides prophetic, biblical explanations for the “shakings.”

“This is the most critical time ever in our history,” says Cahn. “America is hanging in the balance between life or death, revival or calamity.”

Adds Cahn ominously, “If we don’t respond and rise up to the call of God to return to Him and to His ways, we may pass the point of no return.” The author fully believes that “in spite of everything, there is hope for America and it’s not too late to return to God—that is, if we humble ourselves and pray.”

During a recent interview on TBN’s “Praise,” Cahn told program host Erick Stakelbeck that in “The Harbinger II: The Return,” a particular scripture is mentioned—a call to prayer—and that these biblical words are key to the moment our country is facing right now.

“‘If my people who are called by my name will humble themselves, and pray and seek my face, and turn from their wicked ways, then I hear from heaven, and will forgive their sin and heal their land,’” said Cahn, citing 2 Chronicles 7:14.

Cahn told Stakelbeck, “In ‘The Harbinger II,’ I tell how this scripture actually changed the course of American history more than once. Once was in the time of Abraham Lincoln, when he called for national prayer. Another was about 40 years ago, when Jimmy Carter was president and it seemed like everything was collapsing in our country, with a troubled economy, the hostages in Iran, and people there chanting, ‘Death to America.’ At that time, a group of people gathered in Washington, D.C., to pray, and I was a part of it.

“Using 2 Chronicles 7:14, we prayed that the hostages would be released, and we all pointed our hands to the Capitol building and prayed, ‘Lord, put who You want into office there.’ Several months later, Ronald Reagan was elected—and America began to come back to our biblical values. The hostages were soon released [on the day of Reagan’s inauguration] and everything turned around, including the economy,” noted Cahn. “I literally saw a change in history.”

Cahn also emphasized, “Now we’re in an even more dangerous time. We need this more than ever. Our nation’s only hope is to repent and pray—to turn back to God.”

With the release of Jonathan Cahn’s newest book, “The Harbinger II: The Return,” on Sept. 1, 2020, thousands of new fans everywhere have embraced his narratives. The book, available for purchase online and everywhere, made the Amazon Bestsellers Top Ten lists of all books in the world and took three of the top ten spots on Amazon’s Christian Books for print, Kindle, and audio—each charting as a Top Ten Bestseller, including #1 Christian Prophecy and #1 Christian Prophecies. “The Harbinger II” also catapulted Cahn’s earlier books back onto bestseller lists, including “The Oracle,” “The Paradigm,” and “The Harbinger.”

The author has made multiple media appearances, including on CBN’s “700 Club,” TBN’s “Praise,” and “Family Talk” with Dr. James Dobson. Cahn is continuing to do TV and radio interviews throughout the fall.

Jonathan Cahn’s first book, “The Harbinger,” became an instant New York Times bestseller when it was published in 2012 and brought him national and international acclaim. His next four books were also New York Times bestsellers: “The Mystery of the Shemitah,” “The Book of Mysteries,” “The Paradigm,” and “The Oracle.” Along with Billy Graham and Keith Greene, Cahn was named one of the top 40 spiritual leaders of the past 40 years who has radically impacted the world.

Called the prophetic voice of this generation, Cahn has spoken on Capitol Hill, at the United Nations, and to millions around the world. Cahn is known for opening the deep mysteries of Scripture and bringing forth messages of prophetic import. He leads Hope of the World ministry, an international outreach of teaching, evangelism, and compassion projects for the world’s neediest. He also leads the Jerusalem Center/Beth Israel, a worship center made up of Jews and Gentiles, and people of all backgrounds, outside New York City in Wayne, New Jersey. His ministry can be contacted at HopeoftheWorld.org and on Jonathan Cahn Facebook.